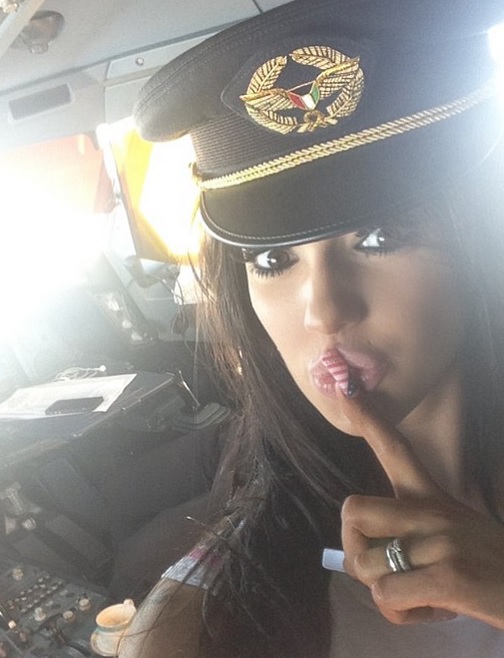 There’s been an epidemic of pilots getting fired for inviting female stars into the cockpit (or flight attendants). There’s usually at least an incriminating selfie, if not a video.

The pilot is also said to have ordered Chloe Mafia champagne, told her to sit on his knee and smoked 40 cigarettes during the transatlantic flight from Heathrow to New York’s JFK airport.

…the married Kuwait Airways pilot begged to see her breasts and boasted about bedding half of the stewardesses.

The female guest in the cockpit declined to show her breasts because they were bandaged from a recent augmentation surgery. She does say she “I pushed something. I don’t know what it did but he said it was fine as the plane flew itself,” and was thankful that the co-pilot “seemed more concerned with flying the plane.”

I remain somewhat skeptical about the pilot ordering champagne into the cockpit of a dry airline. Indeed, the country’s investigation found that there was “no evidence the pilot or the co-pilot drank alcohol during the flight” and though you might expect the report to find that given that it would be especially embarrassing if they did, it also seems unlikely they’d have been able to ‘order’ champagne from flight attendants who wouldn’t have been catered with any.

The incident apparently happened in 2013, but the story with video came out in the summer of 2015 and that’s what prompted the investigation. There’s no statute of limitations here.

The decision announced by Transportation Minister Eisa Al Kindari in a report to the parliament was taken following an investigation he ordered in July when news about the unprecedented security breach and ethical violation broke out.

The report, a copy of which was obtained by Kuwaiti daily Al Jareeda, said that the co-captain was demoted over his role in the case that shook Kuwaitis to the core. The plane crew was not aware of what was happening inside the cockpit and no punitive action was taken against any member, Al Jareeda said on Saturday.