Two weeks ago I wrote that American was considering introducing a premium economy cabin.

”We’re looking at it,” American Airlines CEO Doug Parker told Australian Business Traveller earlier this month, after a pause to carefully choose his words. “We think there’s a lot of opportunity there.”

As I said at the time, “there is a market for something between a dreadful economy long haul experience and a super-luxe business class one.”

Premium economy is a common international product, and in many markets does well especially ultra long haul. For instance, I’ve had problems even buying a Premium Economy seat on Qantas between Sydney and Los Angeles.

On EVA Air’s Boeing 777s premium economy is eight across (versus 9- or 10-across for most airlines’ regular economy), and has the kind of legroom you see in domestic first class. There are footrests and double-sized armrests between seats. Meal service is upgraded.

This morning American has announced they’ll be the first US airline to offer a premium economy cabin on most of their widebody international fleet.

American will be adding premium economy to their widebody international fleet (excluding Boeing 767s), and will still continue to offer Main Cabin Extra additional legroom seating on both the international and domestic fleet.

Here’s the aircraft that will be receiving premium economy: Think of the seats like domestic first class with footrests. Premium economy will have more legroom than Main Cabin Extra (38 inch pitch) and greater width as well. I’m told that “The bulkhead seats will have attached footrests that extend, the rest of the seats will have an adjustable foot support bar beneath the seat in front.” 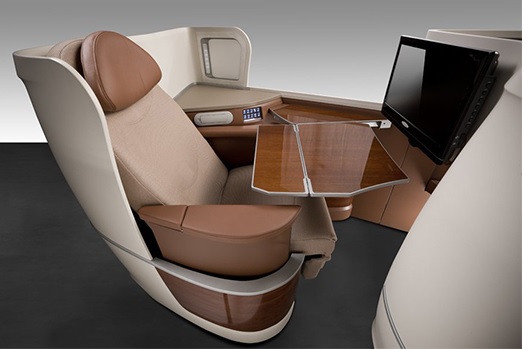 In addition to better seats, there will be a separate meal service, amenity kits, noise reducing headphones, and “personal on-demand entertainment” as well as complimentary alcoholic beverages. I don’t have exact number of seats in each cabin yet, but my understanding is that premium economy comes primarily at the expense of economy seats rather than reducing the number of premium cabin seats on each aircraft. Although there’s no word yet on whether we lose the more generous business and economy class cabins of the first 13 retrofitted Boeing 777-200s as part of the change.

At this point there’s also no word on how will this affect upgrades. Will it still be possible to upgrade from coach to business class, or will upgrades be “one cabin only” and thus coach to premium economy, premium economy to business?

Until our premium economy seats are assigned a fare class and loaded for sale, it’s too soon to say what the upgrade policies will be or what rates will be applied for redemption awards. We will have more information when we get closer to a sale date.

With Delta making their extra legroom seating a separate booking class on domestic flights there have been rumors that Delta will move to a similar ‘real’ premium economy offering internationally. It will be interesting to see whether American goes this alone amongst US carriers, or if a domestic airline actually has gotten out ahead of Delta on something for a change!

Overall I’m a big fan of premium economy (in much the way that I’m a fan of JetBlue’s Mint), a premium product that’s within reach of more passengers. However it raises concern for frequent flyers looking to upgrade. The sections will be small (so upgrades to premium economy could be tough) and airlines with premium economy may not offer upgrades from economy to business class. Will the upgrade experience be diminished as a result of this new offering?