There’s been a trend over the past several years for airline to award status based on ticket spending. United took this to the most extreme place, dropping miles and flights and in favor of a straight-up pend counter. It’s crass, and it’s not very engaging. It also misses the point that the customers who spend the most aren’t necessarily the most profitable, or the ones with whom a program can influence wallet share.

It’s been obvious for two decades that frequent flyer programs were the highest value part of an airline. Mileage Plus was the only profitable piece of United when the airline filed bankruptcy 20 years ago. They secured debtor-in-possession financing from their co-brand card partner, and when times were rough pre-sold miles to provide the airline with liquidity. During the pandemic the largest airlines raised $6.5 to $10 billion apiece against the future income streams of their frequent flyer programs alone.

Nonetheless it took the pandemic for airlines to try new things, to move out of lock step with each other in their race to the bottom. American Airlines did something truly revolutionary (if not obvious) in declaring that the company’s best customers aren’t just the ones who spend the most on low margin airline tickets. Instead spending money with the airline’s co-brand credit card, shopping through their portal, and engaging in myriad other transactions with their partners that cause those partners to buy miles from the airline are the sine qua non of a profitable customer. A minimum of 30 flights will be needed to earn ‘choice awards’ that start at 125,000 Loyalty Points per year. But status itself can be earned without ever setting foot on an airplane. And upgrade lists are prioritized based on elite status followed by the number of loyalty points you’ve earned in the preceding 12 months.

Why do I say this is fun?

I was never going to have a gas preference based on 1500 miles per year (especially when it meant giving up cash back) but every little bit helps towards status and could make the difference in clearing an upgrade.

Earning 40 miles per dollar sending flowers is no longer exciting the way it was 20 years ago. But when you can stack a card-linked offer, and when the credit card charge earns miles and when all three activities earn elite status too you’re going to want to jump on it. It brings to mind the old AAdvantage credit card ad, “Was he sorry? Or was it the miles?” Or my favorite of the series with a diamond ring, “Was it love? Or was it the miles?” 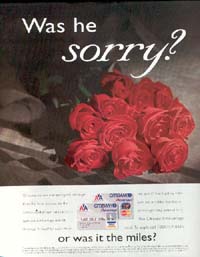