When United came under criticism for how it handled denying boarding to a Nobel Prize-winning economist, Robert Schiller and his wife were departing… Denver.

When a knee defender sparked national outrage last year, the flight that had to divert to Chicago was headed to… Denver.

The airport that considered banning Chik-fil-A because Donald Trump was, naturally, Denver.

Just two weeks ago the airport was evacuated over bath salts.

When TSA agents admitted to manipulating nude-o-scopes so they could fondle attactive female passengers, that happened… well, it could have happened at any US airport. But it happened in Denver.

Denver’s airport appears to be a third possible answer whenever you play the Germany or Florida game. (The idea is that every crazy urban legend story actually happened in either Germany or Florida, and your job is to guess which for each one.)

And it’s all explained in: How Denver Airport Became the International Hub of Conspiracy Theories

The “swastika” runway is just one piece of one of the most outlandish theories attached to Denver International Airport—that it was actually commissioned by the New World Order (aka the New Nazi Party). The stone dedication marker for a time capsule buried under an American flag at the south end of the terminal actually mentions the “New World Airport Commission.” Furthering speculation, its design features the square and compasses symbol associated with the Freemasons.

The strangest thing about this is that the New World Airport Commission doesn’t exist.

Actually the strangest thing is that it goes on from there.

Especially since the airport is preparing to unleash biological warfare.

There are markings on the ground all around the airport, but the particular markings that are beneath the biological-warfare-themed mural include a mining cart with the initials “Au” and “Ag” on it. To some, they are clearly the symbols for gold and silver. To others, they represent an abbreviation for the “Australian Antigen,” a deadly strain of hepatitis that could be used as a weapon in biological warfare.

Gargoyles guard baggage claim. (So does the lead singer of Puddle of Mud.)

Fourteen planes had cracked windshields at the airport at one time back in 2007. “[T]he cracks were a result of an electromagnetic pulse from the nuclear testing site under the airport.”

All of this has piqued interest in the airport. And a problem:

The biggest issue with the airport over the last few months has been the presence of unauthorized recreational drones. In one case, a drone flew within 500 feet of an aircraft. Drone users aren’t supposed to fly within five miles of the airport, and no higher than 400 feet, but there have been 17 close calls in 2015, 10 of which were actually in DIA’s airspace. The airport is currently creating a group to address the drone issue. No word on whether the group will meet in the secret underground city.

Of course, Storm Troopers actually have invaded the airport and it wasn’t even an ANA flight. 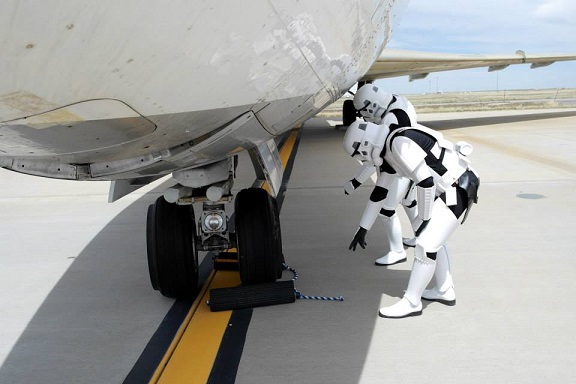 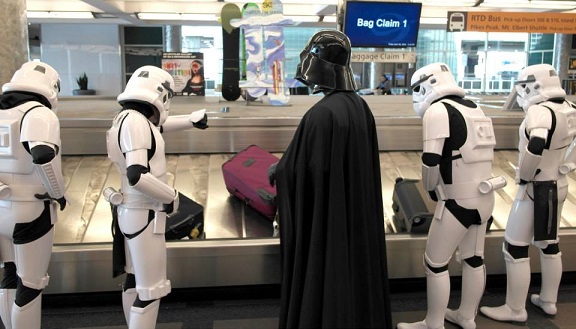