Emirates will apparently be bringing an Airbus A380 to Chicago O’Hare for a single flight.

Currently Emirates has scheduled Airbus A380 service to several US cities:

Chicago is normally a Boeing 777. Boston, Seattle, Houston, and Orlando are operated by Emirates Boeing 777s. Houston was recently downgauged from an A380, and the inaugural Orlando flight was operated by an A380.

O’Hare pulled a permit to build an A380-capable gate back in February, and at the time both Emirates and British Airways were noted as having expressed interest in flying A380s to the city.

Emirates has perhaps the flashiest first class product in the sky on its Airbus A380. But there’s real substance to it too. Emirates offers a comfortable private suite, good food and flexible dining, top notch wine and spirits, and a bar that’s matched or exceeded only by Qatar.

Perhaps the single most defining feature of Emirates first class on their Airbus A380s is the onboard showers, large bathrooms with heated floors and showers with plenty of space to get ready after a long flight.

And whereas Etihad has just half a dozen A380s so far, and Singapore has nearly 20, Emirates has 75 with nearly as many on order. That makes the product much easier to fly than that of the airline’s competitors for best first class. 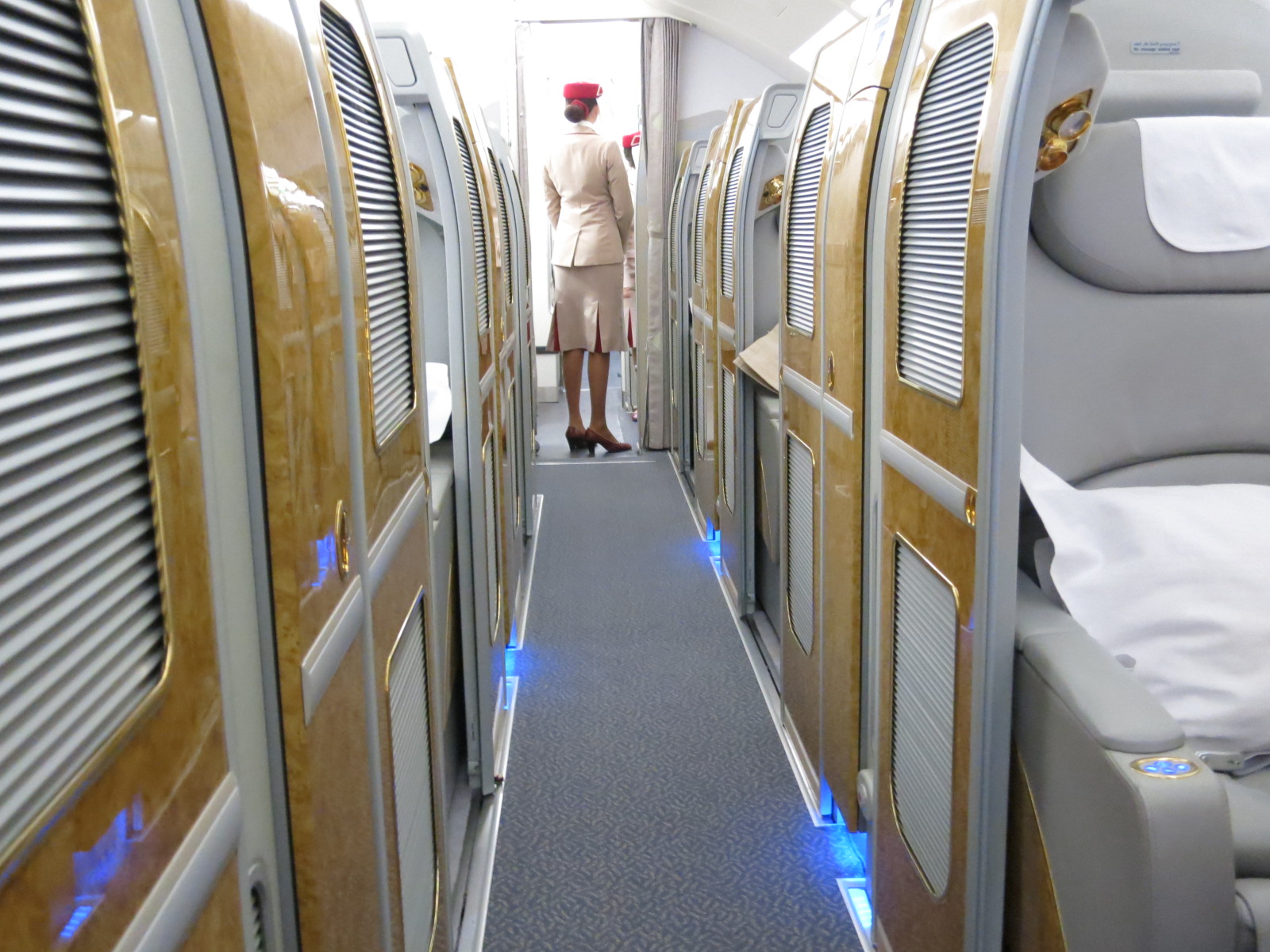 Of the three best first class products, Emirates actually gives you the least personal space. There’s plenty of personal space for a commercial airplane. But they squeeze 4 seats across into the narrower upper deck of the A380 while Singapore puts 4-across in the wider lower deck.

What Emirates suites are, though, is fully ‘tricked out’. And they make really good use of the space. The suite has a retractable lighted vanity mirror in front of a large video monitor. Beside it is a lamp, which is actually fairly classy (not something I associate with an otherwise ‘tricked out’ product). There’s an orchid placed in the suite, and a snack basket provided pre-departure (which is then taken away for takeoff, and returned afterward). Champagne is Dom Perignon. Emirates has invested more money in wine than anyone else, and their spirits program is equally impressive, you can have a glass of cognac from a $500+ bottle if you wish. Emirates has extremely extensive amenity kits were provided as well. Beyond the amenity kit though the seat itself also comes with amenities stocked. There’s so much swag in first class on Emirates for long haul that they give you a branded bag for it all. What sets the A380 apart from Emirates first class on their 777s is their onboard showers. Only Etihad offers showers besides Emirates, and the Etihad showers do not compare.

There are actually two shower rooms. And there are two shower attendants who keep the rooms clean throughout the flight.

The shower rooms double as lavatories for passenger use when they aren’t booked for showers. These are perhaps behind only Qatar as the nicest airplane lavatories in the sky, and of course Qatar’s don’t have showers. The shower spas are gorgeous, and well stocked too. What I love the most, aside from the shower aspect of it, is that the lavatory is spacious and spotless. There’s plenty of room to move around, to change into pajamas, you just don’t feel cramped. And it’s being cleaned between each use and kept up beautifully. Of course, the shower itself is the centerpiece. You get 5 minutes worth of water only. After all, water is heavy and takes fuel to carry. But 5 minutes of water is actually plenty. You get a color-coded meter, and can start and stop the water as you wish. Emirates has a bar behind business class on the upper deck, and of course first class passengers have access (and they’ll fetch alcohol from first class for you, too). This isn’t just a self-serve snack area, it’s an actual bar tended throughout the flight. Hopefully Chicago O’Hare will get permanent Airbus A380 service in the near future!