In my post yesterday about the Korean Air Visa’s increased signup bonus, there were questions about fuel surcharges. 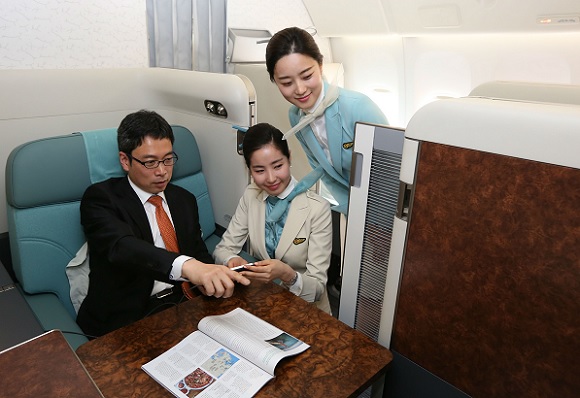 I’m a big fan of Korean Air first class. You can transfer Chase points to Korean Air’s SKYPASS program, and then redeem for first class awards.

If you want first class awards, you can generally get them. But you will pay fuel surcharges.

And the amount of fuel surcharge you will pay, in addition to miles and taxes, is the amount that would be charged on an equivalent paid ticket. That amount varies by destination.

Commenter tjp74 noted that the Korean Air suite “Looks like it’s based on Asiana and Etihad 1st suite.” And then expressed that booking Asiana first class using United miles would be a better deal.

Hold on a minute. Let’s challenge that assumption. Is it really better to save the fuel surcharges here?

United charges 240,000 miles roundtrip for an Asiana first class award between the US and North Asia.

Korean Air charges 160,000 miles (which can be transferred in from Chase). You’ll pay $57 in fuel surcharges for, say, Los Angeles – Seoul – Hong Kong and return. Again, it varies by destination and some will be higher. Bangkok will run about $400 roundtrip.

Korean Air charges 190,000 miles for first class roundtrip between the US and Bangkok, plus that $400 in fuel surcharges and taxes. United charges 260,000 miles plus taxes. With Korean Air you’re going to have to come out of pocket, but that extra $400 saves you 70,000 miles ($0.0057 per mile). Granted, Chase points are worth more than United miles but this is still a swap that makes easy sense.

Let’s look at other destinations, though. Korean Air charges 80,000 miles roundtrip in business class between the US and Europe. That’s 45,000 miles less than Delta charges. (Delta will add fuel surcharges if your trip originates in Europe, but not if it originates in the U.S.) Now the case isn’t as easy. You spend 45,000 fewer points but come out of pocket a real chunk of additional cash. You’re paying 1.9 cents per point you save.

Although it also depends on what program’s award chart you’re comparing to — if you were booking via United MileagePlus, they get 140,000 miles roundtrip, and the savings is 60,000 miles — 1.4 cents a mile.

Again, it comes down to the destination and whether you’re more miles or cash constrained whether paying fuel surcharges make sense when using miles from a program like Korean’s whose award chart is quite reasonable.

On the other hand paying fuel surcharges through a program like British Airways’ — whose award chart is rather ludicrous for long haul premium cabin awards on top — is another story entirely.