Back when United’s premium cabin meals were branded with celebrity chef Jacques Pepin they actually had economy meals which were chef-branded. United’s chef in economy was Sheila Lukins.

Thirty years ago of course United had an economy meals partnership with McDonalds — with happy meal toys (I have both Ronald McDonald and Grimace). United replaced the galley carts with ones specially-designed to keep the burger warm while the lettuce and bun stayed cool. 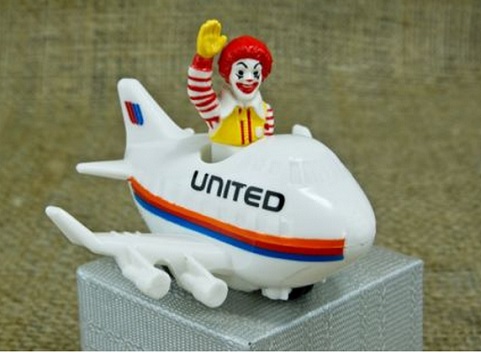 US airlines are never going to be a match for their foreign counterparts. On an Etihad flight from Abu Dhabi to New York JFK this year I ordered my eggs scrambled with smoked salmon. That wasn’t an option on the menu, but they had smoked salmon bagels, so I asked if they might use the smoke salmon in my eggs. However with increased competition for premium cabin customers airlines have been:

Dishes include Pink Sea Trout with Turnips and Pearl Onions and Short Rib Cannelloni with port, black truffle, wild mushrooms and parmesan as well as a desert Opera Cake.

Their meals are in effect but I had to develop a flow chart reading the press release, and then confirm my understanding with American.

Here’s where new celebrity chef dishes apply, in whole or in part:

Last year United announced a collaboration with the Charlie Trotter Project. The late chef Charlie Trotter had been associated with United from 2007 through 2010, though those were some of United’s worst meals (customers used to say meals like the short ribs ‘gave them the Trots’).

One Mile at a Time argues that celebrity chefs don’t matter, if anything given limited catering budgets he wants airlines to invest more in the food not pay for a chef’s brand.

I’ve never understood the point of working with celebrity chefs. American says they’re “continuing to invest in the customer experience” by doing this. As most of you probably know, airline food budgets are very limited, which is why food quality on planes is often less than satisfactory.

…Presumably the only reason a well regarded chef would put their name on an airplane meal is because they’re being paid a huge sum of money for it. I just feel like that huge sum of money could instead be spent on raising the catering budgets so that better ingredients can be used, which would go a much longer way.

Judged that way, I’d agree and I think most people would. How the food tastes is more important than whose name is on it. But I’m not sure that’s the choice.

Airlines often invest more in food at the same time they brand with a celebrity chef. The celebrity chef is a way to capitalize on the food investment, to make people aware of it. It’s signaling. American’s Marcus Samuelsson meals five years ago were really quite good. Customers don’t taste test a variety of meals. They don’t know how good the meal will be before they buy their ticket. They may not know what the older food tasted like.

Paying a name chef to associate with the airline meals is a way to announce the airline cares about its food. And if consumers believe the name chef cares about their reputation at all, they won’t put their name on the food unless it meets certain standards.