Don’t do this in Kuwait.

“The passenger is a Palestinian with a Jordanian passport and he was born in Bethlehem in 1983,” a security source told the daily.

“He was not a resident of Kuwait and was on transit from Pakistan to Jordan. As the passengers were boarding, the traveller asked a steward ‘Are you a Muslim? We must liberate Palestine and eliminate infidels’. The passenger was taken off the flight . “[A]ll passenger luggage” was re-screened as the incident was treated as a bomb threat.

In Kuwait, they take Claude Rains’ approach to airport security:

Or perhaps, from earlier on in the film, “Realizing the importance of the case, my men are rounding up twice the usual number of suspects” even.

Police officers at Kuwait International Airport arrested 47 people wanted for various cases, said security sources, noting that the suspects were arrested during a security inspection campaign in the airport’s parking spaces and surrounding areas. The sources added that detectives examined 230 persons’ IDs and found that 47 of them were wanted for forgery, theft, slander, assault and hit-and-runs.

Not only that, but a passenger was arrested “for suspiciously cancelling his trip only half an hour prior to his flight’s departure” — as though this is exactly the point of a refundable fare.

The man booked the trip two days out, went to the airport intending to take the flight, but had to cancel after he had already gone through passport control He was held for the entire length of the flight he had booked.

The TSA may not care much for following the law, but I’m perfectly comfortable opting out of naked imaging when I’m flying from or within the U.S. When asked to go through a nude-o-scope in Thailand, I follow the junta’s orders. And I realize that just taking photos of aircraft in the UAE can cause problems I don’t even want to contemplate.

Then again I imagine airport security in North Korea could be even worse. After all, when Kim Jong Un didn’t like the work being done on Pyongyang’s new domestic terminal, the official in charge was purged. 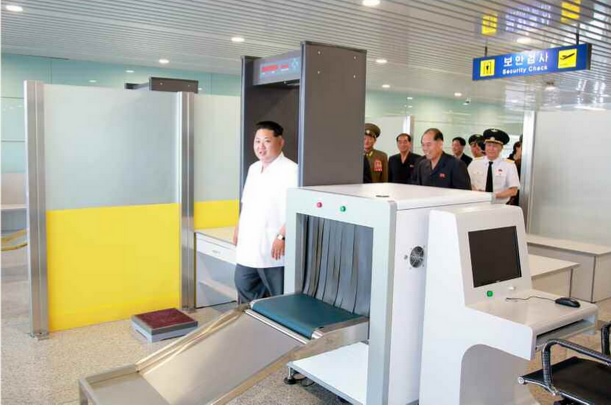