Bloomberg suggests that strong financial performance of US airlines is leading to more investment in product, specifically wine. Personally I have not yet noticed this on my premium cabin flights with American and Delta.

Wine certainly can taste very different in the air than on the ground.

Most people don’t know very much about wine (I suspect that the average premium cabin customer is like my seatmate who brought her own wine in a coffee cup onboard), though they think of it as a luxury good. Delta’s wine program recognizes this specifically avoiding bottles that are priced too inexpensively at retail (lest people think they’re low quality, regardless of taste) and that have too unsophisticated a label.

Consulting master sommelier Doug Frost arranges wines for a blind taste test by a beverage committee, which scores the wines to help decide which will be served.

No indication whether these taste tests happen in the air or on the ground though it’s almost certainly the latter.

Most Wine on US Carriers is Quite Bad

What’s missing from the discussion is how much carriers are spending on wine. My sense is that Delta is willing to spend more on international business class wine than either United or American.

When I told the New York Times that flyers should be concerned about the inflight experience at American as a result of the merger with US Airways, then-US Airways Vice President of Communications John McDonald sent me a couple of bottles of their business class wine to taste. I gave them away at Frequent Traveler University later that month. 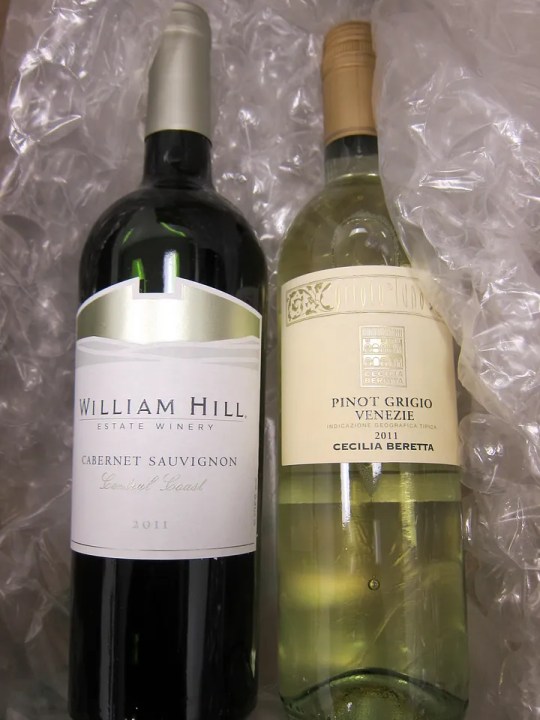 Even the most knowledgeable sommeliers are constrained by:

Though he was certainly knowledgeable about wine, I found the bottles being poured mostly undrinkable. And that was on the ground.

The Halo Effect of Wine

Emirates is said to have spent $500 million acquiring wine for its flights. Now, that’s a multi-year purchase. And it probably involves lots of rounding. Clearly the goal was to get to the $500 million number in order to promote it. As I wrote in “How the US Airlines Can Compete And Win Against the Big Gulf Airlines (Instead of Lobbying for Protectionist Policies)” there’s a halo effect that they’re going for with big investments in their first class especially. By making it so over-the-top that it’s discussed with awe in social media they get a real brand awareness and a perception of a quality product that even permeates their coach experience — often exceedingly reality by a wide margin.

While Emirates is spending half a billion dollars on wine, much of their fleet consists of an angled business class product.

Singapore Airlines is the only carrier that serves both Dom Perignon and Krug onboard. There’s this moment when a Singapore flight attendant asks you if you’d care for champagne, you say yes, and they respond, “would you prefer Dom Perignon or Krug?” with a certain confident smirk. While tastes vary, and many will prefer Krug regardless, I believe the only proper answer to this question is, “What year is the Dom?”

We take advantage of the sizzle of premium wine brands to reinforce the overall sense of luxury,” says Singapore spokesman James Bradbury-Boyd, calling sophisticated wine “one of the pillars of the brand.”

Everything Old is New Again

I started flying in premium cabins regularly in the late 1990s. Meals then were something truly different than what we experience today.

I’ll never forget that lunch on my very first business class domestic flight on United (on a 3-cabin aircraft) consisted of an almond-dusted prawn appetizer followed by steak and then dessert, served in courses.

In the spring of 2001 it was incredibly controversial in frequent flyer circles that United began serving a ‘gourmet cheeseburger’ in domestic first class. Frankly it was a darned good burger (not like the burgers we’ve seen onboard US carrers since). The sense at the time, though, was that a burger was simply not first class.

Wine was never United’s strong suit in my opinion, at the time they were serving Louis Martini Cabernet which was then about a $12 bottle. Completely inoffensive, though uninspired.

Still, there was a ceremony around wine and back before 2001’s recession we saw airlines competing to portray themselves as offering the best wine program and promoting that flight attendants were being sent to wine school. I’m not sure how that was supposed to make the wine taste better, though perhaps it would help the flight attendant explain to you why you like the wine.

Unquestionably when times are good and profits high, airlines will compete with each other for high yield business, and one of the ways they do that is signalling that they are offering a high quality product. An easy way to do that is through wine.

Wine Isn’t Where I’d Invest as a US Airline

The challenge though is that the rhetoric often doesn’t match the reality. It strikes me that wine can be an especially costly place to invest. And claiming to invest there while only making the tiniest of improvements at the margin can lead to a mismatch of expectations and disappointment.

Don’t get me wrong — there are many very high quality wines at a low price point! I’d probably focus on Spanish Tempranillo and Cava myself if I were buying for a US airline. But it’s also very difficult to find inexpensive wines that are good and will appeal to the vast majority of tastes and that can also be a signal of quality as much as actual quality to consumers unfamiliar with wine.

Thus I think it’s ultimately an unlikely area for successful investment by US carriers. I’d focus on other elements of the experience, like improving meals themselves and ultimately on codifying, incentivizing, and enforcing strong service standards.