So that’s awkward. Dave Cush was taken by surprise with the question, and he does try to walk it back some.

..Cush first avoided the question: “What’s that? OK. I’m looking for the exit.” That sparked laughter from his audience of entrepreneurs and techies at the Nasdaq Entrepreneurial Center.

“I’m not going to give a one-word answer on this,” Cush said, before reaching back for the fastball: “I would say Trump.”

That drew a disapproving “ooooooooh” from the audience, with one woman — perhaps from the creative class that the airline caters to — commenting, “Really?” Another simply exclaimed, “In San Francisco?!”

Cush continued, “The reason is that I think — I don’t know if the time is there yet — but I think we need a change in the way this whole political process works right now.

“The political establishment in Washington has a very difficult job,” Cush said. “But I’ve become more disenchanted with career politicians.”

(And by the way, Jimmy McMillan has endorsed Trump, too.)

Cush wants people “who have done things and created things and had to compromise” and he thinks “Donald Trump’s all about compromise” although for someone who constantly reminds us that he “wrote the Art of the Deal” he couldn’t manage to get to walk himself back into Thursday night’s debate. He kept asking Fox News to give him cover, they didn’t have to toss their anchor Megyn Kelly but could they make a contribution to charity? Fox News wouldn’t do it, Trump couldn’t save face, he had talked himself into a corner.

Virgin America’s CEO said, “I’m a huge Clinton fan, but I find the process that Trump has ignited very interesting.” He also, understandably, asked “Maybe we can edit out those last two minutes.”

The Donald used to have a travel booking site (“The Art of the Travel Deal… There are plenty of other sites out there, but only GoTrump.com gets the best deals.”). He owned an airline and went bust. And he stayed at a Holiday Inn Express last night.

Trump is a long-time friends with Qatar Airways CEO Akbar al-Baker (and his hotels proactively solicit Muslim guests to come to the US). 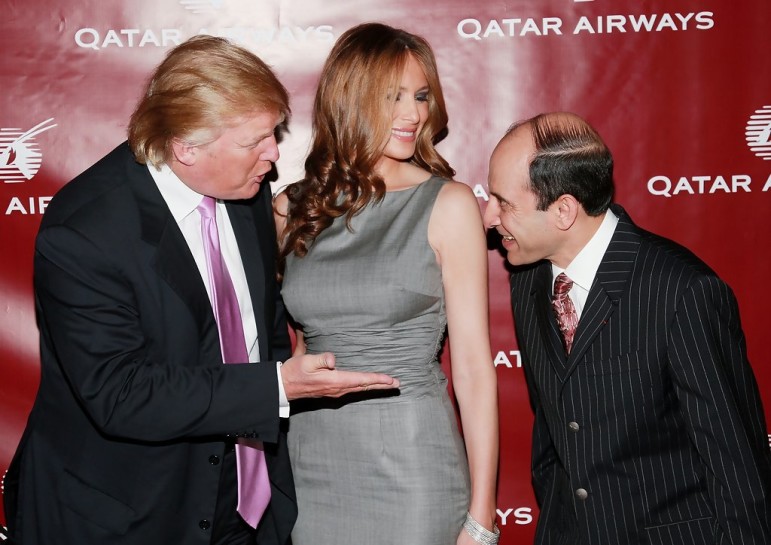 There was even, apparently once a Trump Rewards Visa.

And Richard Branson is after all a showman as well, if one who isn’t quite as controversial.

I think what’s most revealing here is that it really lays bare the Trump phenomenon. Sure, among his supporters are there uneducated racists and authoritarians? Of course there are. You can single out subgroups of supporters of any major candidate, and they may even be more prevalent than usual here. But that’s not the whole of it, that’s not the driver. It doesn’t fully explain the support.

There’s people frustrated with politics who look past the crazy, and downplay or ignore the really scary stuff and see it as cutting through politics. Ultimately that view is probably wrong. One candidate can’t do that. They still deal with Congress. They still face constraints from a Supreme Court. And the federal bureaucracy is huge, and very difficult to turn. A President appoints heads of agencies but is not him or herself the head of the agencies. And political appointees are a tiny minority in each agency. It’s not just the incentives that face any given politician which lead them to accomplish less than what they promise, it’s the very system and structure of government. But Cush is looking for something.