I really despise BA’s refusal to assign seats to business class passengers in advance. My wife and I were on separate record locators. I’m a British Airways silver and entitled to an advance seat assignment. She’s not. Despite a successful TCP (“to complete party”) request linking the reservations, I was unsuccessful in getting a seat assignment for her.. so I didn’t assign one myself, waiting instead so that we could secure seats together at checkin.

24 hours out I checked us in online. There was no problem checking her in all the way to Barcelona. My reservation wouldn’t allow it, I could only check myself in to Heathrow, and the website wanted me to wait until 24 hours before the Barcelona flight’s scheduled departure to check in for it. And despite my silver status showing, I was never able to assign myself seating online, the website always told me I was entitled to but the feature was unavailable. And naturally BA in the US was already closed for the evening.

Sorted out, but an annoying way to start our British Airways trip. No worries, I had emphasized several times to my wife that on this trip (unlike the one we completed less than two weeks prior) the flights weren’t really part of the vacation. They were just transportation. How true that turned out to be.

I took the backwards-facing seat so that my wife could face forwards. It’s only strange at takeoff where you’re being pulled off your seat instead of being pushed back into it. Otherwise it was fine. I just wished that the privacy screen retracted more than it does, with the screen down so I could talk to my wife I couldn’t also make use of the reading light as it was blocked. 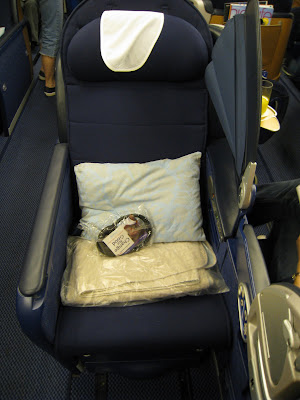 British Airways doesn’t offer sleeper service on this flight. No taking your meal in the lounge and going to sleep once onboard the after-9pm departure. They don’t have the facilities at BWI with the contract lounge. One would expect them, then, to make meal service a quick affair since the hop across the pond is scheduled at just 7 hours and with a decent tail wind can be not that much more than 6 (although we had no such wind on this occasion). Alas things didn’t work out that way.

Flight Attendants didn’t pass out menus until inflight, entertainment system didn’t start until at least 30 minutes in, and meal wasn’t served until an hour and a half into the flight. For a 9pm departure without a meal option in the lounge this is unacceptable – my tray wasn’t cleared until more than 2 hours in. I went to sleep for 4 hours, and woke up during breakfast service.

The first meal wasn’t especially good. I ordered the beef, which they advertise as a filet but was rather tough to actually be one. Substantially overcooked, and drowned in a sauce such that the liquid was almost spilling out over the sides of the dish. My wife had the pasta. I skipped the cheese offering (stilton and cheddar) in favor of heading off to sleep. 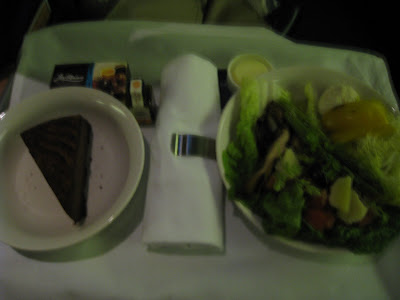 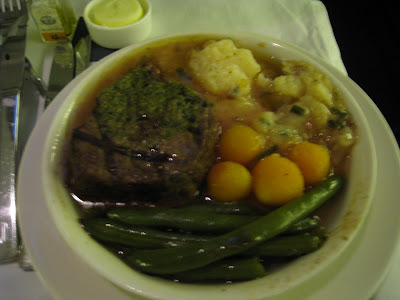 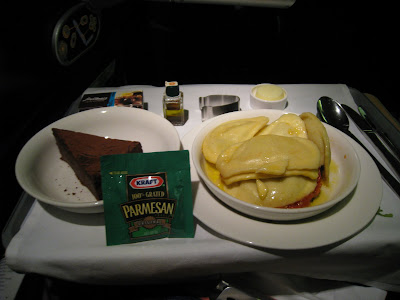 Breakfast was modest, fruit or cereal and bread (muffin / croissant … the croissant was served cold) and a “bacon roll” that was also severely overcooked, the roll was hard and the bacon tasted burnt.

But I can’t complaint too much. Despite not much room when laying the seat flat, and a bit of a narrow seat, I managed to get some good rest. The guy in row 4 kept kicking me during the night, though, and I blame seat design more than I blame him. (My return flight would be on a 747 equipped with BA’s newest new Club World seats, which I hadn’t yet flown, so I was looking forward to the comparison with the older generation onboard the 767.)

Landing was on-time, taxi time wasn’t too bad, and we were the third and fourth passengers off the plane.

Things were pretty deserted when we disembarked at Terminal 4. While I regretted not having the chance to see Terminal 5 first hand, given the teething problems I was rather relieved. We headed over to the bus for Terminal 1 & 2 transfers, didn’t have to wait long before it departed, and took the long drive over. Out the bus, up the escalator, down the escalator, through security (for which there was no wait) and through the shopping arcade to the BA Terraces lounge. All-in, we were off the plane and in the Terminal 1 lounge in 30 minutes. Not bad for Heathrow.

Took a shower, the facilities were fine, not great by any stretch but no real complaints – above-average even. Refreshed, I wanted to sit down to some coffee. But just like on the flight, the lounge had no cream for coffee, only milk. I’m really persnickety about this. I drink half and half in my coffee at home, and I’ll settle for a modest amount of cream. But I don’t like milk in my coffee, and I won’t touch soy or non-fat. How hard is it really to offer cream? It has a longer shelf life than milk, buy a small carton if demand is light, but it wouldn’t be unreasonable to expect that it be carried. (I’ve had some difficult-to-follow conversations all over the world when I’ve wanted cream with my coffee, but wherever I am folks seem to find it for me.)

Couldn’t get a signal from BT OpenZone on my Lenovo X60 for most of our time in the lounge up until the very end, but my wife managed a signal (and despite the lounge attendants saying it was a pay service, it was in fact complimentary) with her laptop. 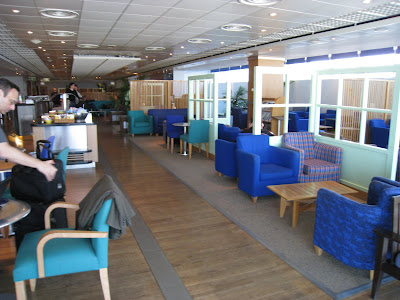 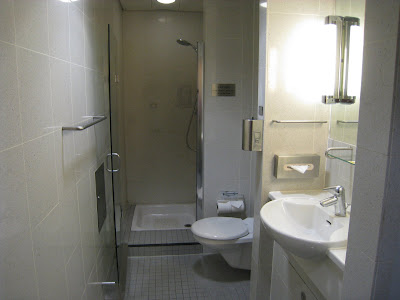