To some people it probably seems crazy to fly from Washington, DC to Barcelona for dinner.  Somehow it doesn’t seem so crazy to me.  And for foodies of the world, knowing that the dinner was at El Bulli probably means it doesn’t seem crazy at all.

This will once again be a trip report in parts, so here’s the beginning.

In the fall of 2006 on a lark I shot off an email to El Bulli, asking them for a Friday or Saturday night dinner any time April through July. I thought I was being flexible, and that I was getting in at just the right time – about three days after their reservation book opened for the year.

I knew that this was a well-regarded restaurant. All the rankings are subjective, controversial, and hardly dispositive – but Restaurant Magazine had selected El Bull as the best restaurant in the world (in its top 50 list) three times.

It’s a hard reservation to get. And needless to say I didn’t get a table for the 2007 season. I was too late. And I wasn’t flexible enough. Their kind email rejecting my request noted that 50% of tables are also reserved for repeat guests. This place isn’t easy to get into, and they’re only open six months of the year with the remaining six reserved for research and development (the chef actually operates a laboratory in Barcelona).

I did resolve to do better the next year, though. I set my Outlook calendar for a few hours before they opened on the first day they’d be taking reservations. I included with the reminder a copy of the prior year’s rejection. And I replied to that email with another – more flexible – request. And I crossed my fingers.

About a month later an email came in from out of the blue – I could have the second Saturday night of their season, in April. Score!

So I needed to fly to Spain. The restaurant isn’t even in Barcelona, but a couple hours outside of it. And there are no non-stop flights to Barcelona from DC.

But for what some would call the best restaurant in the world, why not? I tend to think people as a whole  underinvest in peak experiences.

Hence I went about making airline reservations.  I had a bunch of not far from expiring Cathay Pacific AsiaMiles which I had earned off Priceline. A few years ago there was an amazing deal where you could earn 1500 eBay Anything Points off of a single night’s successful four-star Priceline bid. And that made me more than happy to help other folks with their Priceline bidding.

Those eBay points transferred at better than 1:1 into AsiaMiles via Points.com.

But AsiaMiles do expire. I had intended to make use of them before the changes to the Cathay Pacific award chart .. used to be that 60,000 AsiaMiles were enough for a business class ticket on British Airways from the US East Coast to most parts of Europe. After October the price went up to 80,000. And of course I didn’t get in under the wire, and it was mid-November when I heard about the El Bulli reservation so redemptions would be on the new chart. I had to transfer a few Starwood points over in order to top off to have enough AsiaMiles for the trip. And those were clearly the miles to use since I had a limited time in which to redeem them.

I’ve generally found British Airways award availability from the US East Coast to Heathrow to be extremely good. But for some reason my specific dates were having a tough time. Nothing out of Washington-Dulles when I wanted to fly, we had to settle for a Baltimore outbound. And on the way back we could either stay in Europe an extra day and fly into Dulles, or leave when we preferred and fly into New York-JFK. I took the JFK option, and though BA partner American Airlines does fly from JFK to DC if you’re going to mix and match partners with the Cathay Pacific award then one of those airlines needs to be Cathay. So the BA/AA combo wouldn’t work. Instead, we bought the cheapest available one-way JFK-Washington National tickets for ~ US$68 apiece.

Cathay Pacific always makes me nervous with their award booking, since they take so long to ticket. I knew to expect 30 days, but it stretched all the way out to 60 days before they issued our tickets. On the one hand that’s good, it means we didn’t have to pay the exorbitant taxes right away. On the other hand it made me nervous. And in this case almost caused a problem – the credit card I had given them for the taxes had some fraudulent activity on it, the bank cancelled the card and issued me a new one. I almost forgot to call Cathay Pacific and give them the new credit card number. Not sure the procedure if, two months after telling them to ticket, they try to charge the card and it’s declined. Speaking of “taxes”, more than US$320 apiece roundtrip really is a bit much.

The day of our departure arrived, and it was just twelve days after we returned from over 24,000 miles of flying, visiting both North and South Asia by crossing the Atlantic twice.

Since we were flying out of BWI, and back into DCA, it wouldn’t do well to drive to the airport. We decided against a cab, too, because we’d be hitting traffic out of DC and the trip up to BWI can be unpredictable… an hour perhaps, or three. Instead we took the train.

I left my office and metro’d over to Union Station, meeting my wife there who had done the same. Train left on time, we arrived at BWI station around 6:40pm, and we waited for the free shuttle bus to the airport. I had only done this once before, probably 6 years ago, and I remembered the bus being right there. It wasn’t this time. We waited. Of all the websites which talk about the free shuttle bus to the airport from the train station, I never came across a single one which mentioned how often this bus came. It took about 15 minutes, but it felt like 45 (and I was ready to take a cab over).

Ten minute bus ride and we were at BWI, the bus was standing room only but it cleared out a bit more over each stop until the last one when we reached non-US carriers and the obscure and vacation charter operations at the end of the terminal.

Walked inside, we had already checked in but did have one bag to check. It was a bag of stuff that really didn’t matter, we’d survive if it didn’t make it (we were transiting Heathrow after all, but this does beg the quite reasonable question of why we were taking it..) and so we got in the ClubWorld line. The ‘fast bag drop’ line was 20 people deep and moving slowly, while we had to wait about 5 minutes for the one person ahead of us to be checked in by the one person working ClubWorld. 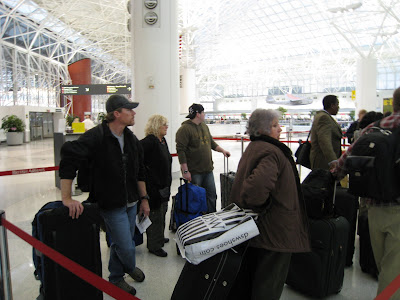 Security for BWI’s E pier featured no premium line, and quite a backup while a TSArse barked nonsense at the crowd (“If you have an electronic device larger than 5.4 inches it must be placed face up in a bin on its own”) Width? Height? 5.4 square inchecs? He even cited a specific portion of the US code for this supposed rule, which was obviously bunk because an important rule like this would be sensitive security information™.

Once through we made the series of left turns to wind up over in the shared Chesapeake lounge which was … ‘ok’ – new but not especially nice. Free wifi with code from front desk, a startling“1234”. Heh. Limited food offerings, some small finger sandwiches (cucumber + red pepper… turkey) and packaged snacks and cheeses. 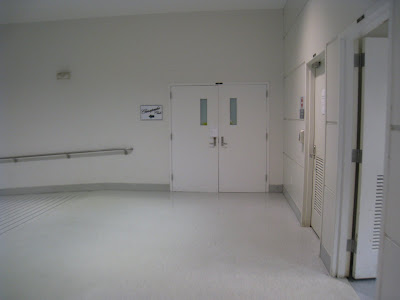 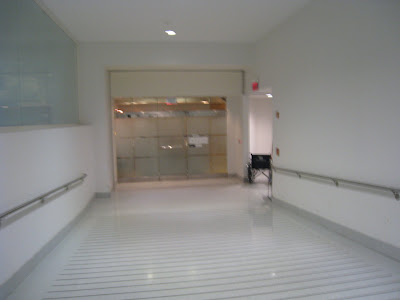 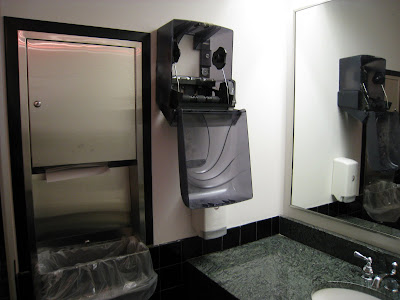 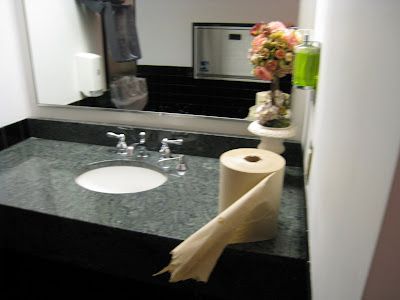 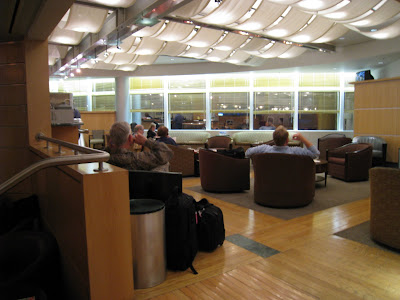 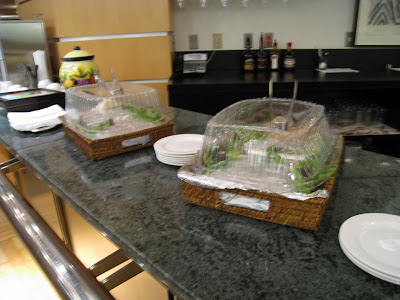