Delta announced this evening that Richard Anderson, who stepped down as CEO in May but remained the airline’s Chairman, “has elected to retire as executive chairman effective this date.”

They did not offer any reason:

Which means there’s a story here, as many suspected there was when he left his role as CEO of the airline, an announcement that came when he was still 60 years old.

Further suggesting that this wasn’t the way it was all supposed to go, they’ve named a new non-executive Chairman (rather than Anderson holding the role until CEO Ed Bastian was elevated): Francis Blake, former Chairman and CEO of Home Depot.

Anderson had first been CEO of Northwest. As CEO of Delta he acquired Northwest. The airline made the merger successful. They made their operation successful. And through it all they always looked out for number one, themselves. 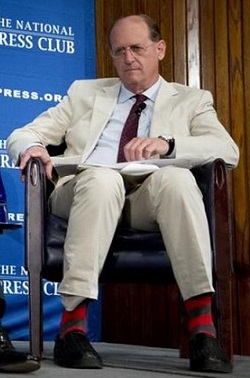 Delta during Anderson’s tenure in my view:

the legacy of Richard Anderson is… mixed. He led his airline to profitability and to the status of most-admired among his US peers.

However Anderson blamed the big Gulf airlines for 9/11 (when Delta partners with Saudia, whose government was at least complicit in the attacks). He did this because he wanted to make lower airfares illegal. The 9/11 comment should go on his tombstone, like the late Marion Barry’s line about the woman with whom he was videotaped smoking crack.

Anderson claimed offloading his airline’s pensions on the Pension Benefit Guaranty Corporation wasn’t a subsidy. They may not cancel many flights anymore, but he shouldn’t be entirely proud of his tenure either.

Loyalty used to matter to Delta. What they’ve come to now, though, is a character issue as much as a business or rewards decision.

He’ll be a controversial figure for a long time in the industry. But he’ll have a lifetime of free flights to take him to meetings of Conquistadores del Cielo.

It will be interesting to see what he does next, since he retires at age 61.