Moshe Orenbuch of Credit Suisse appeared on CNBC’s Power Lunch midweek addressing American Express. His claim is that biggest problem Amex faces is the value of their rewards. He says that they give less cash back, and that Membership Rewards has introduced lower cost options for redemption and so expenses on average have fallen.

Customers see those options and think the rewards have less value. Although the claim that a couple hundred thousand Membership Rewards points gets you a toaster sadly goes unchallenged. (HT: Ryan)

American Express’ problems were revealed by having lost Costco. The problem isn’t that they have fewer cardmembers without a Costco deal. The problem is that costs have gotten too high. Retaining Costco would have been too expensive. I described Citi’s approach to Costco as ‘we lose money on every transaction but make it up on volume.’

Margins from interchange will fall over time. Having lower costs isn’t a vice, though it helps understand why there may be limits to growth.

Last summer Nomura Holdings made news claiming that American Express would suffer because it had the least valuable rewards.

The claim was that they had lower rewards expense (which is different than delivering less value). American Express has introduced retail redemptions that don’t cost the company as much as miles transfers to airlines.

In general redeeming points for paid airfare is done at just one penny a point, not the 1.25 or 1.3 cents a point that some other banks offer and they don’t reward all spend with 2 points per dollar spent each worth a penny (equating to 2 cents a point for airline redemptions).

There’s something to the claim that customers want simple value propositions. Although Membership Rewards customers are still heavily travel customers, and points transfers remain core to the program. Analysts don’t understand the value of those transfers, for the same reason US airline analysts don’t understand the value of frequent flyer programs generally.

For the most part investment analysts are ignorant of frequent flyer programs. They don’t pay them much mind. Even though — even in the era of devaluation and low fuel prices — they likely remain the most valuable asset that airlines have.

Airlines that have spun off their frequent flyer programs have obtained valuations between $50 and $200 per member according to an L.E.K. Consulting report.

American Airlines has a market cap of about $21 billion — up 25% over the past month. Valued on the basis of members, American AAdvantage with 100 million members, would seem to be worth $5 billion to $20 billion.

The high end, obtained only by the first spinoff of Aeroplan, was unique. The Canadian market isn’t as competitive as the US is. And as a new product, it may not yet have been clear how to value the concept.

Still, at roughly $2 billion a year in revenue from the credit card deal alone (and low costs associated with it), a valuation for the program that’s outsized relative to the value of the whole airline doesn’t seem unreasonable.

When American went looking for laundry lists of mechanisms by which they might raise revenue as their stock is under scrutiny due to falling revenue, they toss out claims about their frequent flyer program which go unchallenged — untested even.

Two months ago American’s top two revenue-driving initiatives were described by airline President Scott Kirby as a new credit card deal and a shift to a revenue-based frequent flyer program. 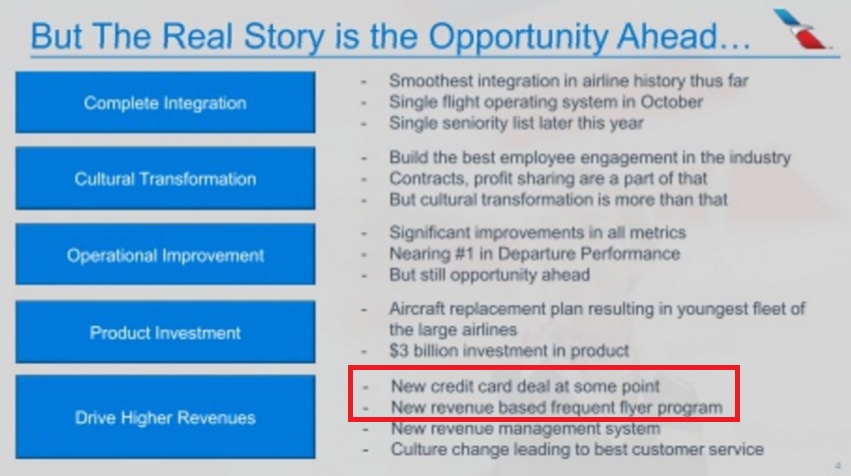 Rewards programs are valuable. High costs aren’t a virtue, but driving value to consumers is. If it’s too expensive to do that, and be competitive, that won’t be sustainable. And high costs to acquire customers and drive spend probably isn’t long-term sustainable. That’s a problem for American Express, but it may be a bigger problem for card issuers with higher costs.

More generally, given the importance of rewards — which Moshe Orenbuch should be lauded for understanding — analysts should pay more attention to them and think more critically about them.