In reading the site I’ve seen you value AAdvantage miles at 1.8¢ in the past.

I wrote an extensive discussion of how much different mileage program points are worth back in December. (At the time I valued American miles at 1.7 cents apiece, though deteriorating availability on American’s own flights and reduced premium cabin award space on Cathay probably knocks that down a tenth of a cent.)

Here are the valuations I gave for different airline miles currencies: 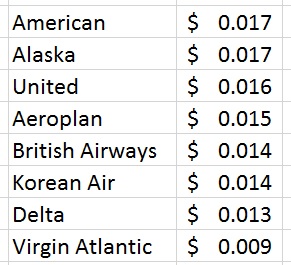 That’s less than the best points currencies that transfer to a variety of frequent flyer programs:

It should be noted that these average values are not the same as how you should value these points in all cases.

But since valuation here is the amount at which you are indifferent to holding miles versus cash this figure is useful for:

But since these valuations are precise I won’t actually pay 1.7 cents for an American mile. I want to accumulate American miles when they’re substantially less costly than 1.7 cents apiece. And I know I am clearly not a buyer at 2.5 cents.

In practice these are fairly blunt tools that tell me “1 cent a point for American miles is a really good deal” but that I’m not going to spend 2 cents unless there’s a very specific scenario — like a few points at the margin to top off an account for an award I’ve put on hold — where it makes sense (and in that scenario, my valuation of each point is higher since they’re helping me at the margin to save with a real redemption).