Peter Finch won an Oscar for his role in Network as a declining news anchor about to be fired, but who causes ratings to spike when announces on the air that he will commit suicide in an upcoming broadcast. He stays on, and offers one diatribe more famous than the rest:

Dallas news anchor Ron Corning offered his own on-air diatribe of sorts against the upcoming AAdvantage program changes. He even cuts up his co-brand credit card live on television. But he seems confused about what the changes actually are. (HT: David W.)

The clip was posted to his Facebook page, and I pointed out that he’s got the premise backward.

American AAdvantage isn’t making status harder to get. For status, 1 mile still will equal 1 mile and it takes the same number of miles as before to earn elite status.

High fares will help earn status quicker, but American was the first airline to do that with the introduction of “points” as an alternative qualifying method that they are getting rid of. The major changes to the program are not in how status is earned.

A year from now redeemable miles will be earned based on spend. But that makes credit card earning (which are bigger than earning from flying) relatively more important. And in March the cost of many awards go up — mostly premium cabin awards, though changes to business class redemptions are relatively modest. The really big changes are to international first class awards. I love a good rant but the rant should be based on facts and educate viewers. 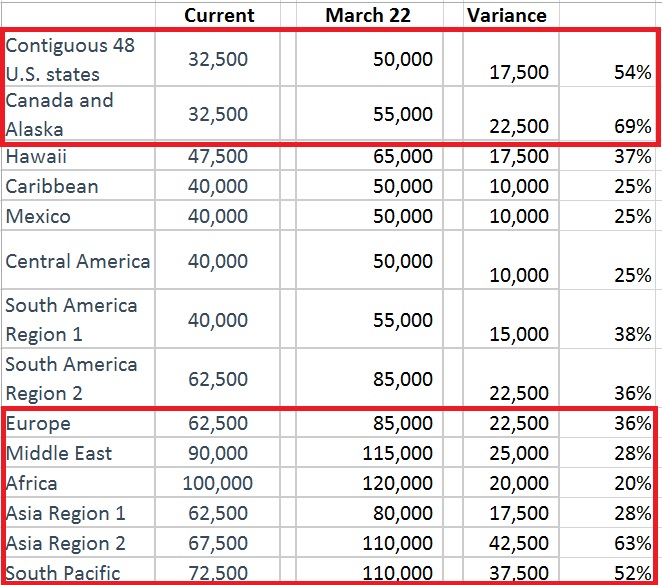 Corning and I had a dialogue on his page, he shared his response:

Hi Gary. Actually here’s the bottom line. Status means nothing anymore on AA since they merged with US Airways because too many people have status. Customer service has and continues to be reprehensible. Baggage fees and change fees amount to gouging. The ability to redeem miles is nearly impossible with more blackout dates and increased mileage requirements for flights. And after reading your post I doubt anyone could disagree the changes to their plan are confusing. So getting rid of my card is the ceremonial end of my relationship with American. Many others who have emailed, messaged, and commented feel the same way.

I’ve also transferred my status to Virgin as part of their courtesy program. I will fly them to NYC/LA/SF. Better planes, better service, more onboard entertainment options. I also have the SW credit card and have already earned enough segments for a free ticket. Easy peasy. AND I can fly out of Love Field.

As for my 200k AA FF points I’ve redeemed them for hotel and rental car for a December trip.

Southwest no longer awards credits from flight segments, but based on spend the way that American will in a year.

I agree that AAdvantage changes are not good for consumers. Virgin America’s frequent flyer program is hardly more generous, though.

He mentions baggage fees, but the credit card he cut up meant he wouldn’t have to pay those. And AAdvantage doesn’t have ‘blackout dates’ for awards, they have dates where awards are more expensive than others.

Virgin America is giving away status to anyone who transfers 80,000 Amex points into the Elevate program. And they easily comped this anchor’s status. That’s pretty inflationary to the status rolls there. Upgrade benefits are pretty weak at Virgin America though.

Bottom line on AAdvantage changes are that in a year the way redeemable miles are earned will change, becoming less consumer-friendly (but less than half of redeemable miles come from flying) and premium cabin awards – especially international first class – get far more expensive.

That’s not good. AAdvantage has been super-generous, not really cutting back while the other airlines did because they were focused on the merger. Now they’re going to be less good than before, more like the other majors. And that’s sad.

But that’s a different narrative than in the broadcast rant… So I don’t think viewers were done a service, they didn’t leave the news broadcast better informed. But I’m hardly the first person to think that!

I’ll give Mr. Corning the last word, from his Facebook page:

Gary, you should go to work for AA’s PR team. And I’m well aware of how the system works. I’ve been in Dallas for 5 years, the hometown market. And I’ve had platinum status. They are not consumer friendly. Cutting up the card was a statement marking the end of my relationship with them. Why would I use a card to get points to fly an airline that is increasingly less customer friendly as you outline point by point by point. YOU are making MY case, ironically enough. Have a nice day.