We left the first class lounge and headed to our gate. Qatar doesn’t provide an escort from the lounge, which in some ways is a missed opportunity for a truly top notch first class offering. And the walks through the Doha airport can be really long.

The highlight of the walk of course is the giant Teddy Bear sculpture. It’s made out of bronze, is 23 feet tall, and weighs nearly 20 tons. A member of the Qatari royal family apparently purchased it for about $6.8 million. It had previously been displayed in front of the Seagram’s Building on Park Avenue in New York. There’s now a big clay sculpture there. There are a dozen flights a day covering the 200 mile distance between Doha and Abu Dhabi. Six of those are offered by Qatar Airways, and six are offered by Etihad. (There’s also a five-times weekly flight on Philippine Airlines.)

Qatar and Etihad are both excellent airlines, and both bookable with American AAdvantage miles. For this flight I was originally booked on Etihad, but changed to Qatar when award space opened up. Since Qatar calls the cabin ‘first class’ it meant I got access to Qatar’s first class lounge in their home airport.

In addition, two of Qatar’s six daily flights between the two cities are operated by widebody aircraft. We were scheduled to be on a Boeing 777 with lie flat seats.

When we arrived at the gate area they hadn’t yet started boarding, but everyone except one other passenger besides us had cleared security. We boarded and found our seats. The cabin was attractive. It’s Qatar’s older business product, laid out 2-2-2. That’s fine for traveling as a couple, but on a long flight I prefer the middle seats so that you don’t have to climb over anyone to use the lavatory and no one has to climb over you. Predeparture beverages and cold towels were distributed. I had had my fill of champagne in the lounge and just asked for water. Menus were distributed as well prior to departure. Menus. On a 200 mile flight. (Click to enlarge.) The cabin filled up completely, including with some rather difficult passengers who insisted their seat should be reclined while waiting for departure, who didn’t like their assigned seats, and who wouldn’t give up their predeparture beverages. The flight attendants in the cabin handled this all with grace and a friendly, helpful manner.

Everyone in the cabin who was being difficult was satisfied and reassured they’d be well cared for. Those who wanted to keep their beverages didn’t have them taken until the last possible moment.

There was no delay of pushback and we taxied quickly and were in the air on time as expected.

Once it was safe for flight attendants to get up they served another beverage, and began meal service. I ordered the shrimp and was surprised to learn that it was a heated – not a cold – dish. I felt certain that for such a short flight they would only be doing cold items.

The whole meal was served on a single tray, of course, not in courses but it was still most impressive. Beverage refills were offered. Once we began our descent and my tray was removed (seemingly the moment I was done) I decided to visit the lavatory, really just to check it out more than anything else. On arrival I planned to go straight to the airport’s Premier Inn but Qatar wasn’t able to print my boarding pass for my onward Etihad flight. Since US-bound flights require check-in two hours in advance of scheduled departure, I decided to make sure I got my boarding pass before going to sleep.

You don’t actually need that much time to clear outbound immigration, Abu Dhabi security, US security and US immigration and I didn’t want to worry about time as much in the morning. I’d sleep better.

That meant I needed to clear transit security in Abu Dhabi in order to reach the transit desk. There were a couple of people ahead of me there. Once I reached the front they had no problem printing my onward boarding pass. They apologized for the flight delay and offered me a hotel room. I was curious what they’d come up with so I didn’t immediately mention I had already booked one.

After a bit of typing the agent at the counter realized I was on an American Airlines-issued ticket and apologized, saying that she’d have given me a room at the Premier Inn for my flight’s 5 hour delay if I was on an Etihad ticket but couldn’t do it on an American ticket. No big deal of course, I was using Orbitz credits for a room there already.

I headed through immigration and onto the hotel, which I’ve reviewed several times in the past (for instance here and here) so we’ll skip going over the basic though convenient hotel this time. 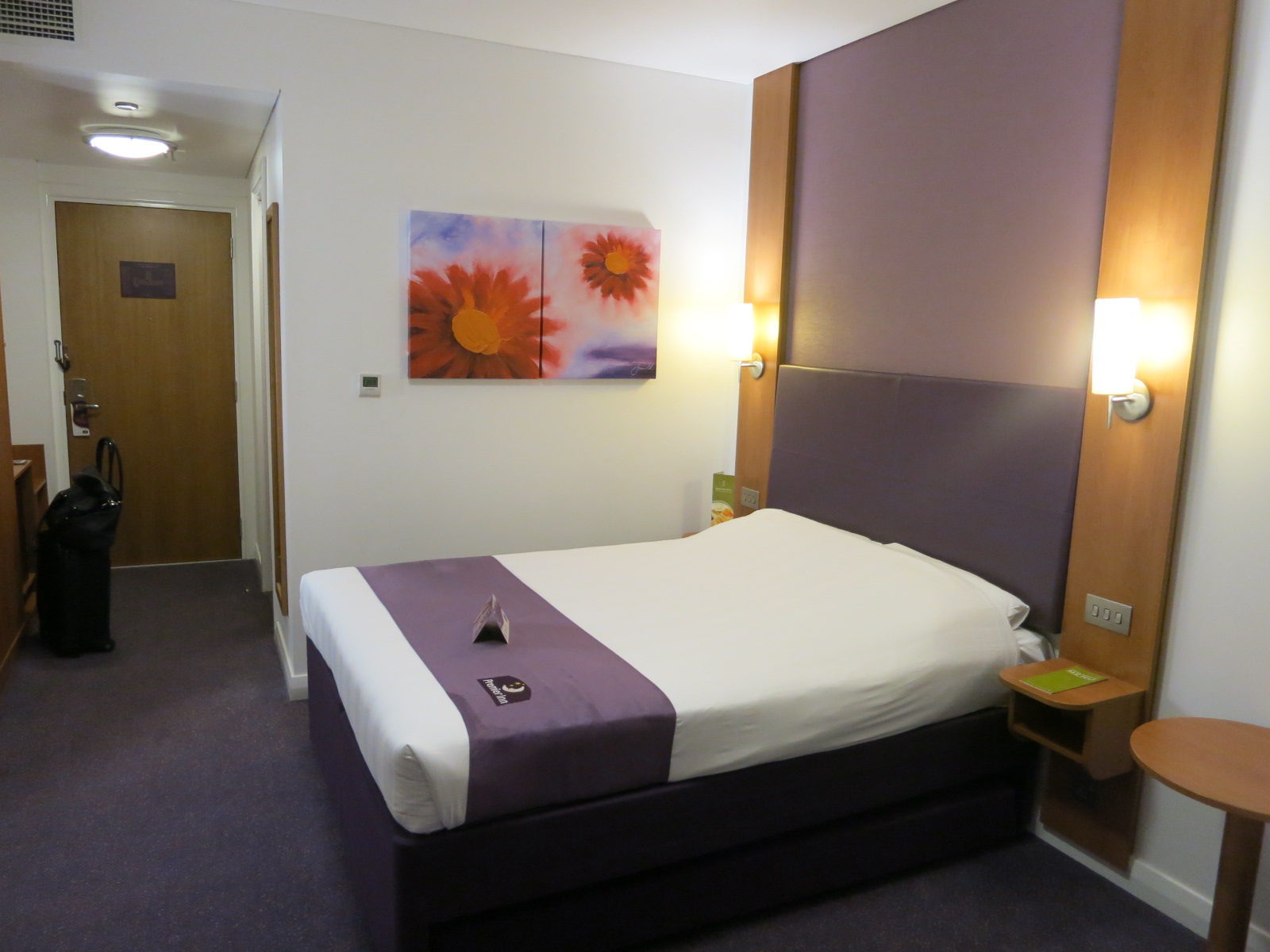 So was Qatar’s Doha – Abu Dhabi on a Boeing 777 the greatest flight ever? No. Was it the best cabin I’ve ever flown? No. But it was surely amazing for the distance.

200 miles is shorter than flying the DC – New York LaGuardia shuttle. A 200 mile flight is 10 miles longer than flying Dallas – Austin. I’ve been told by an American Airlines flight attendant ‘no drink service’ in first class on that flight because of the short duration (though we do usually get a drink, and quick pass of the snack basket — though some flight attendants pass it before takeoff, otherwise sometimes the snacks don’t make it out until we’re in our descent).

We got a hot meal with choice of entree, a dessert from French bakery Ladurée, multiple passes for drinks and lie flat seats. And the flight came with access to Qatar’s Al Safwa first class lounge.

I’ve flown three-cabin international first class on short hops before — like Lufthnasa from Ho Chi Minh City to Bangkok (445 miles) and United from Hong Kong to Ho Chi Minh City (925 miles). The very first time I was in a 3-cabin first class cabin was on United many many years ago when my Airbus A320 was swapped for a Boeing 767 for Chicago – Detroit.

There’s little question that this was the best flight experience in that category. And it didn’t cost me anything at all, as an add-on to an Abu Dhabi – New York JFK award ticket I already had issued. (Indeed, I not only saved myself having to buy the segment to start that award ticket home, there wasn’t even an add-collect for taxes — in fact I got $8.75 per passenger back by originating in Doha versus Abu Dhabi.)

Update: worth noting that the airline just announced full year net profit of $445 million up from $103 million the prior year. The 19 year old airline has 186 planes.