American Airlines frequently begins boarding prior to posted boarding time, so when I am going to need overhead space I’m not just boarding 30 minutes prior to departure… I’m showing up at the gate several minutes before that.

Last Tuesday, though, my flight was nearly completely boarded when it was more then 35 minutes prior to departure. I got on and found all of the first class overhead bins closed. A flight attendant opened one for me, directly above my seat. It was empty. Score!

This got some pushback. There was a suggestion that other passengers in economy being denied overhead space to save some for me wasn’t fair. (In fact no one had to gate check bags on this flight.) 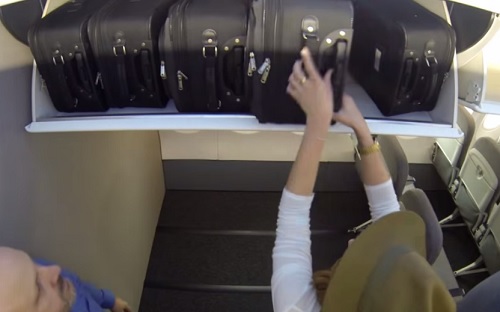 Often passengers will put their bags up in the first class overhead bins on the way back to coach, even when there’s still space in the economy bins. They’ve learned that there might not be space in back. So they put their bags up before they get to their seats in back and learn there’s no space, so they don’t have to return to the front of the plane and so no one takes the available bin space in the interim. It’s a dog-eat-dog world, everyone for themselves when it comes to bin space. And only the most aggressive don’t have to gate check their bags.

There’s an information problem. What bin space has already been taken? What’s left? It causes an inefficient distribution of carry on bags. Coach passengers with bags up front don’t delay deplaning much, they don’t take their bags out as soon as the seat belt sign goes off (and that’s a little bit inefficient) but they still get their bags on the way to the front of the plane. But first class passengers have to put their bags farther bag, which means fighting their way back into the cabin on landing to get their cabin baggage.

When first class finishes boarding and stowing bags, I do think any remaining overhead bin space ought to be available to anyone. I’d rather see that bin space used than have someone forced to gate check. Surprisingly not everyone on Twitter agreed, I didn’t expect it but I did see a sentiment that ‘first class overhead bins are for first class’ just as I saw it expressed that ‘overhead bins are shared space’ and no one is more entitled to the space than anyone else. In other words, first class is a seat only.

I thought the flight attendant did something wonderful, I was able to show up 5 minutes prior to scheduled boarding and still have overhead space near my seat. Others thought it was wrong, wrong, wrong.

So Should First Class Get First Dibs on the Forward Overhead Bins?