The New York Times has a piece on how airlines are monetizing premium seats making first class upgrades harder to get.

The perks of being a frequent flier are not as valuable as they once were. That is especially evident to travelers hoping to score a free upgrade to first class.

Airlines, more and more, would rather get money for those upgrades. So they are using last-minute deals to entice passengers to pay to move to the front of the plane, while leaving frequent fliers languishing on the waiting list.

Two years ago I explained why first class upgrades had become harder to get.

A decade ago discounted first class fares were rare. People paid $2000+ for an airline ticket up front, or they got the upgrade for free with their coach ticket. Back then revenue first class was usually less than 10% of the cabin, although on some routes of course it was higher.

There was very little in-between. Now airlines are more aggressive in taking some incremental revenue for the seat instead of only offering first class at full fare.

The technology has changed, too. There used to be coach fares and first class fares. Now airlines can sell first class as an add-on to the cheapest available coach fare (indeed to any coach fare).

Not only are airlines selling the seats cheaper, they’re making it easier for people to buy them. Go to United.com or AA.com to buy your ticket and you’re likely to be prompted with the suggestion that it’s “only” a certain amount more for first class. When people don’t look for that cheap price, it’s suggested to them. Some say yes.

Didn’t buy first class? If there are seats left the airline may try to sell it to you in person. While airlines usually say they are trying to accommodate free elite upgrades before selling those first class seats for “tens of dollars” to non-status frequent flyers, it doesn’t always work out this way. United’s systems are notorious for the cheap buy up offers, sometimes made only to non-elites.

Last month I wrote about United offering me (a non-elite) a $59 buy up to first class for one of the last 2 seats while 13 people were on the waitlist for an elite upgrade. 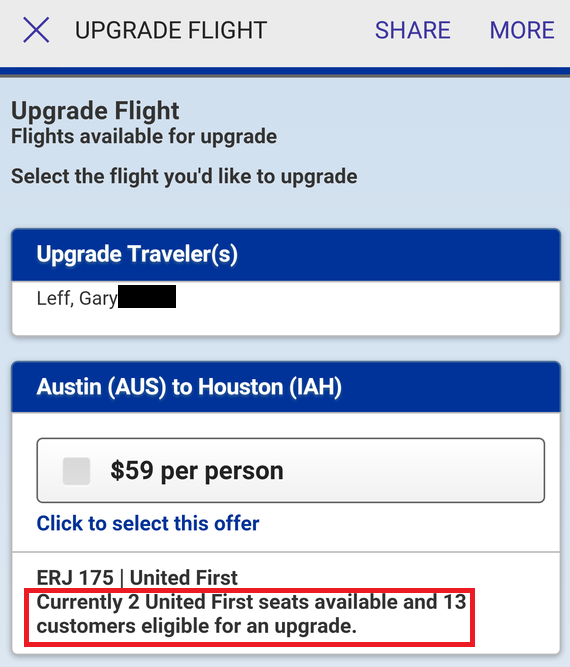 In 2010, Delta disclosed the rate of success for elites in securing first class upgrades.

Since then however first class upsells have been on the upswing. When Delta began upselling into first class, only 11% of premium cabin passengers had paid something to be there. Since then: If you want to have the best change of first class upgrades, you want to fly when there’s the least amount of competition for scarce upgrade seats.

Five Strategies for Sitting Up Front

Here are five less exciting, but more realistic, strategies for sitting up front.

Unquestionably upgrades are harder as airlines sell more seats, including selling them cheaper than before. And that makes loyalty less valuable than it used to be.