I spoke with American on Wednesday morning about an upcoming very modest tweak to their award chart.

They’ve gone to pretty great lengths to reach out in advance about even minor changes they’re making (I got a note last week about Avis being the only car rental company that shows up for booking on their site, and reassuring that did not mean other companies would no longer earn miles) ever since they received substantial and well-justified criticism over making changes to their program 16 months ago without any notice.

American let me know that they’ll be increasing the price of ‘AAnytime’ extra availability awards for a handful of dates around the holidays starting some time in August. This is for ‘level 3’ AAnytime awards only, and only for a few days where level 3 awards even apply. This does not change American’s saver award pricing at all. These are awards that hopefully no one uses.

Here are the new, unpublished, ‘high’ award levels which apply to a handful of dates around the holidays.

No changes for Hawaii

What are American ‘AAnytime Awards’

American has three levels of ‘AAnytime’ awards (extra miles for last seat availability) in addition to saver awards. In other words, they have a four tier award chart.

Until April 8 of last year it was just a two tier chart.

They used to offer ‘AAnytime’ awards for twice the price of coach and all members could have the last seat available on an American flight for that price.

US Airways on the other hand had multiple levels of pricing and even had blackout dates still.

As part of the merger they went with more expensive, multiple tiered last seat availability pricing (like US Airways) with no blackout dates (like American). This was not a win for flyers.

They originally published a chart that showed three tiers of AAnytime pricing. The third tier was an ‘asterisk’ and not a published price. 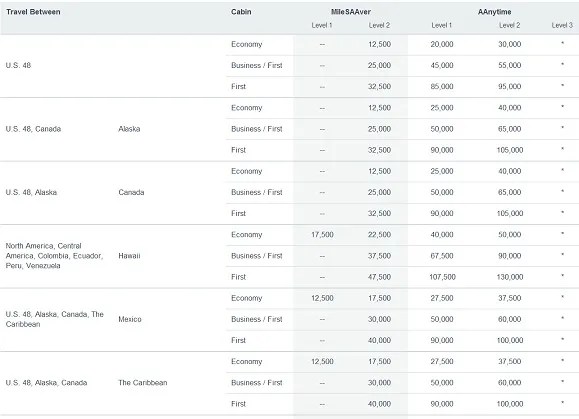 Now they only show two tiers, but note that “AAnytime award levels vary by date and a few select dates require a higher number of miles.”

How Are AAnytime Awards Priced?

There are two very important statements contained in the caveat about AAnytime award levels varying.