Marlin Jackson was onboard a Delta flight from Atlanta to San Diego on Sunday, sitting in a window seat on the left side of the aircraft. The passenger in the middle seat in his row was traveling with an emotional support animal — a dog weighing about 50 pounds. The dog was sitting in the passenger’s lap. I mentioned this story on Tuesday.

Mr. Jackson sat in his window seat while the dog reportedly growled. Since he was sitting in the window, he was pinned in when the dog attacked — twice, reportedly for 30 seconds.

Pets flying in the cabin usually cannot be more than 17 pounds and must be inside a carrier underneath the passenger’s seat, although given risks imposed on airlines by the Air Carrier Access Act they’re reluctant to push back on passengers (let alone charge them, like they do for pets) who claim to need whatever animals they wish to bring for ’emotional support’ reasons. 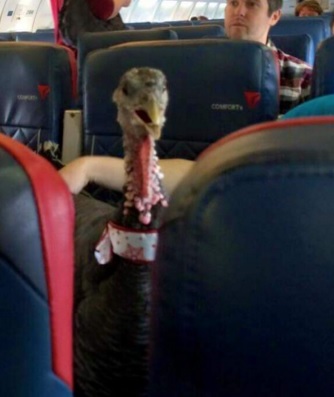 In this case the dog caused real damage — apparently puncturing the passenger’s lip and gum. He received 18 stitches.

He’s since retained legal counsel, who shares a photo of the man’s injuries: It is troubling that an airline would allow a dog of such substantial size to ride in a passenger’s lap without a muzzle. Especially considering the dog and its owner were assigned a middle seat despite Delta Air Lines’ policies that call for the re-accommodation of larger animals.

We expect airlines to follow procedures as required and verify any dogs travelling unrestrained in the open cabin are trained for handling the large crowds and enclosed environments encountered on board an airplane.

Ultimately I’m perfectly well in favor of pets traveling in cabin when they need to provided they follow rules for safety. My yorkie is too old to travel well at more than 15 years old, but on rare occasions he flew — and flew well. Here he is at the Dallas Fort-Worth D terminal pet relief area during a connection (connections afford the time for a potty break). I believe pet in cabin policies should be more liberal than they are currently, and that cost and restrictiveness have led to the explosion of using the claim of emotional support as a justification to avoid those rules. The solution likely lies in simultaneously cracking down on ‘anything goes’ with emotional support animals and extreme restrictions on pet in cabin.

It’s reached the point where we need a solution that no longer encourages passengers with animals to cheat the system through a giant legal loophole.