Pakistan International Airlines has the worst financial performance per employee of any airline in the world.

Yet employees feel they aren’t well-compensated enough for their contribution, and are fighting against privatization which they fear could undermine their compensation, benefits, and no show jobs. (Pakistan is required to privatize the airline under terms of an IMF loan.)

When flight operations go south, the airline is particularly bad such as sending all of their passengers by bus to another airport over 160 miles away, only to have them turned away and sent back.

Passengers have shown up in Lahore only to be told their flight was ‘really leaving’ from Islamabad — only to make the journey to that other city to find out they were misinformed.

When PIA employees are forced to overnight passengers at a hotel at the airline’s expense, the employees earn kickbacks from those hotels.

An interview with Pakistan International Airlines’ Chief Operating Officer reveals that the challenges he and PIA face are fundamentally different from those of the big global carriers.

While American Airlines is handing out bonuses, trying to get employees to like their jobs and be nice to customers, Pakistan International Airlines figures it would be a start if they’d just clean their aircraft.

[I]t is quite easy to motivate employees. There are so many areas on the agenda where we can improve. Cabin cleaning is a must. An aircraft must smell clean.

That’s likely harder than it seems if this sign from the women’s restroom in the Lahore airport CIP lounge is any indication. 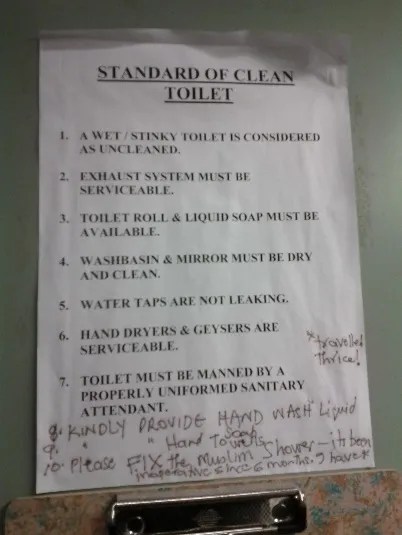 Even when the airline manages to operate on-time, that creates its own problems: customers build failure into their expectations and don’t actually show up for flights when they’re scheduled to depart.

We improved our on-time performance from 60% to more than 80%. In the last few months this increased to 95%. But this created a new problem because some passengers started missing their flights once PIA became more punctual.

The airline operates a fleet of:

They’re planning to reconfigure “up to five” of their Boeing 777s with a new business class product, with the first one expected to fly in February.

Here’s an ad for their current business class product:

But here’s what it’s like to fly PIA without air conditioning:

Despite “1.5 million Pakistanis living in Dubai” Pakistan International Airlines has only a 9% market share between Pakistan and Dubai. Everyone would rather fly Emirates.

Nonetheless, the only place to go for PIA is up. In a country of 200 million people, Pakistan’s commercial airlines operate a total of just 70 aircraft (including turboprops). So if the country doesn’t allow foreign competition inside its borders, the airline stands to benefit from catchup growth alone. And hope, it seems, springs eternal:

When Islamabad gets a new airport in July next year—which will be similar in construction to Singapore Changi’s Terminal 2—this will be the perfect facility.

While they’re not quite ready to “dream of being part of a global alliance” they do hope to codeshare and also that,

In five years, PIA should be delivering a much better service, be focused on what’s important, and operating daily flights with harmonized schedules.